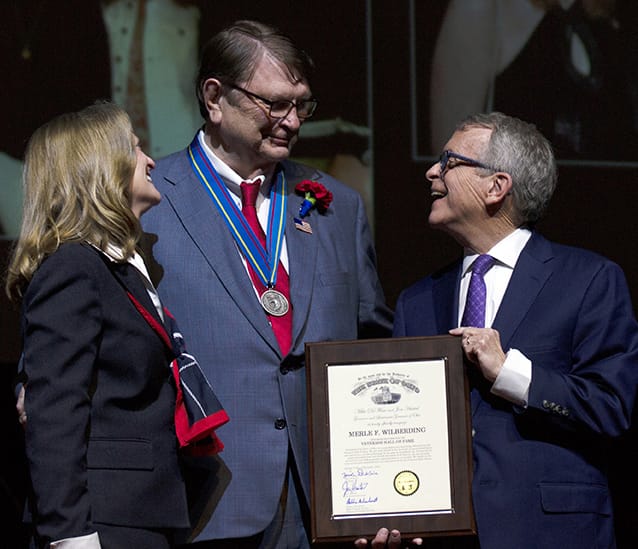 Coolidge Wall Co., L.P.A. is proud to announce that Merle Wilberding, a long-time attorney with the firm, has been selected for induction into the Ohio Veterans Hall of Fame, a State of Ohio program that honors veterans more for what they did after their military service than for what they did during their military service. Many other states have since established veterans’ hall of fame programs, including New York, Connecticut, Indiana, Kentucky, North Carolina, Arizona, and Pennsylvania.

Governor George Voinovich initiated the program in Ohio in 1992. Its charter members included six Ohio presidents who had previously served in the military, Astronauts Neil Armstrong, John Glenn, James Lovett, all Ohio Medal of Honor winners, and has since inducted various leaders in business, philanthropy, education and community service.

A celebration dinner was held in Columbus on Wednesday, November 6, followed by an induction ceremony on November 7, where Governor Mike DeWine awarded Wilberding and other inductees with their ribboned-medallions. Inductees also rode in the Veterans Day Parade in downtown Columbus on November 8. In May 2020, they will be enshrined on a bronze plaque in the Riffe State Office Tower.

Merle Wilberding served four years as an Army JAG Captain during the Vietnam War. He briefed and argued the Government’s case in the appeal of Lt. William Calley’s conviction for his role in the My Lai Massacre. After Merle’s discharge, he joined Coolidge Wall where he continues to practice. He used his military experience representing the family of Marine LCpl Maria Lauterbach who was murdered by a fellow Marine whom she had charged with sexually assaulting her. With the support of many Congressmen and Congresswomen, Merle successfully pushed for changes in the Uniform Code of Military Justice to better protect victims of sexual assault. He works with the Law & Leadership Institute, which supports programs that promote diversity in law and leadership.

Wilberding was a founding trustee of the Dayton Literary Peace Prize Foundation, which recognizes the power of the written word to promote world peace. He has authored seven books, including two children’s books funded by grants to provide supplemental materials for civics education to disadvantaged students.

His community service has earned him many awards, including the Ramey Award for Distinguished Community Service from the Ohio State Bar Foundation, the Lloyd O’Hara Public Interest Law Award for Community Service, the Distinguished Alumnus of the Year Award by St. Mary’s University (Minnesota), and the Muse Machine Honoree Award. He is President-Elect of the Dayton Bar Association.