When the Cool Book Club had its discussion of the murder mystery thriller JUSTICE HILL on March 25, 2021, it invited its author, John Macleod, to join the discussion by Zoom. It is definitely a book for lawyers as the reader seeks to discover the murderer of Jason Worthy, a wealthy and successful Washington lawyer who was brutally murdered at his secluded retreat in the Shenandoah Valley of western Virginia. The plot starts with two girls, Sam and Jessie, who grew up in a coal mining hollow in West Virginia, and then we follow their different career paths before confronting each other over the ethics and fairness of the guilty verdict.

The discussion gave the group the opportunity to explore the author’s mind as he developed his characters and plot. There were many legal vignettes in the book, including a discussion about the real-life experiences that they were drawn from. John Macleod’s legal career was spent litigating the coal mining laws and other natural resource disputes, giving John Macleod the opportunity to argue the “Spotted Owl” case in front of the United States Supreme Court in 1995.

The discussion was especially interesting because John Macleod is a retired Washington lawyer and, more interestingly, John was a law school classmate and long-time friend of Merle Wilberding. That connection gave the group the opportunity to explore those days of yesteryear, some of which managed to make the narrative in Justice Hill. At Notre Dame Law School, John Macleod was Editor-in-Chief of the law review and Merle Wilberding was the Executive Editor, a pairing that was confirmed by this photograph of the two of them taken in 1969. 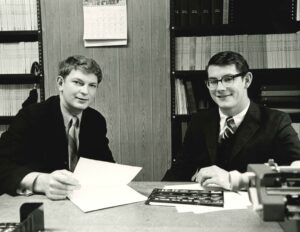